You could say, this is where the weekend started and you would not be wrong, it was. The trip to Showboat Television Studio in Pembroke takes around, an hour and a half from our home. With Dippy our Crach’o’Magic Van, off we went laden with supplies for a few days with punitive plans to visit friends in Cardigan after filming. Dippy expressed the need for a short break about twenty miles from Pembroke, which under the circumstances created some fleeting anxiety. Nevertheless, after a breather, Dippy proceeded without incident and we arrived in good time.  The first flash of Crach’o’Magic.

“Park in the Jehovah’s Witnesses Church Car Park, opposite the TV studio.” They said. So we did! Noodle our ever faithful hound, emptied his tank against a bush near a fence and a cacophony of dogs barked in protest.  Leaving the back door and windows open for Noodle, we locked Dippy and headed up the hill to the studio. A voice from hell screamed from the other side of the fence and suddenly it was joined by its body, peering and scowling at us. A rather portly lady with a purple face and steam coming out of her ears, stood with legs astride and screamed again. “Have you got a dog in that van?” More steam from the ears. “Have you got windows open?” Even from where she stood, if partially sighted she would have seen the back door open as well as the windows. So a fruitless enquiry but she was clearly on a mission. “You can’t park here!” The next onslaught flew through the air towards us, in a tone befitting a traffic warden minus pen and ticket pad. “This is for the Jehovah’s Witnesses, not any old riff-raff!” It was clear any attempt to ignore this beast of a woman was doomed to fail.  I strolled back down the hill and politely explained we had permission to park, adding if she calmed her excitement somewhat, apoplexy may be avoided. Her colour became even more purple and steam from her ears was beginning to block out the sun, or so it seemed. Deciding not to argue or even attempt further explanation, I turned to walk back up the hill, just as a lady from Showboat Television appeared, walking down. With brief explanation of our predicament, off she went to tackle the portly lady, who still stood in defiance. Later we were told, she did not know the building across the road from her house was indeed a Television studio, despite having been there for over two years, and the obligatory signage of course, leaving even the casual observer with no doubt as to what went on in the building. However, the protestations about parking continued. Later with filming completed, returning to the car park, our portly nosey-parker was absent. There are small mercies!

So a grand introduction to the day, and of course it gave us all something to natter about during introductions. Judith Barrow, presenter of the Book Programme settled me into the studio and away we went. I am not going to say any more at this point, as we do not want to spoil the programme which will be aired in August. Showboat TV is well worth a visit, their resources and relationships with other organizations is impressive. Everybody was so warm, friendly and welcoming, excepting our earlier friend of course. As the sun continued to blaze, with the wind at our backs, we headed up the coast to Cardigan. 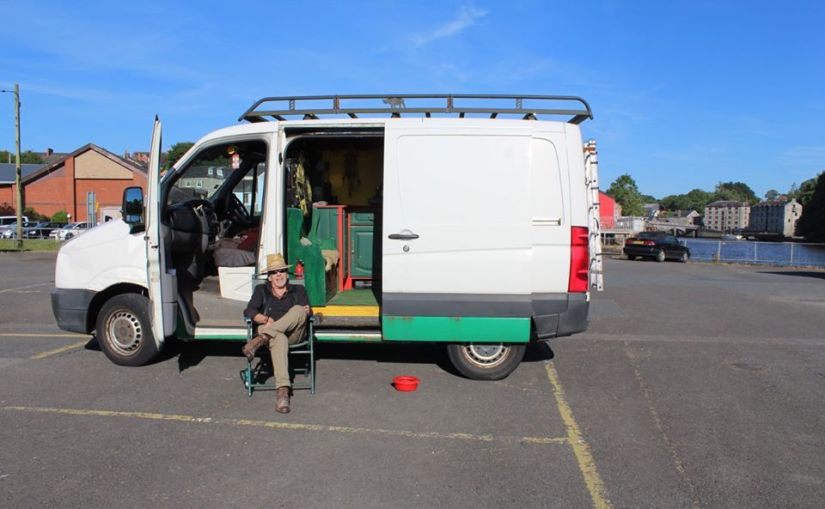