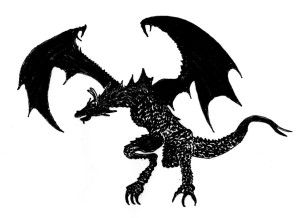 ‘CRACH FFINNANT – RISE OF THE DRAGON’

Hanging on for fear of my life’s imminent demise, I used every drop of strength I could muster, blood pulsing through my muscles, straining with effort in the name of survival. My arms wrapped around Tan-y-Mynedd’s thick muscular neck, thighs and heels digging into a scaly armoured body provided me with some illusion of safety. Allowing myself to be cajoled into flying at such great speed aloft in the heavens, riding a dragon, in itself warranted an examination of my sanity. But I had been given no choice in the matter, none at all. Tan-y-Mynedd’s great wings flapped, glided and flipped this way and that, as we flew on through the night. Our destination, the ‘Great Council of Blue Stone’.

The full moon illuminating a dark night sky gave light to all below and the stars above twinkled. Tan-y-Mynedd the Fire-Dragon glided with ease, trapping draughts of air beneath huge wings, tail swishing left then right and back again. With the dip of an appropriate wing tip, gathering speed, he hurtled on. The great Dragon flew in and out of large fluffy clouds, limiting vision to the end of my nose, reminding me of the many times I had been temporarily blinded by a mountain mist. But as he flew on, the clouds dispersed and I could see for miles around, above and below. Peaks of mountains glistened, seemingly so small, far below. Valleys flashed into sight – there, then gone. Rivers wound their courses from source to sea, crisscrossing, twisting, splitting and turning, giving the appearance of an enormous spider’s web guarding the earth so far below.

Tan-y-Mynedd the Fire-Dragon twisted a wing, dipped downwards and flipped his long scaled tail. He glided down through the sky slowly from the heavens in ever-decreasing circles, the mountains, valleys, pastures, lakes and rivers getting closer and closer with every twist of his tail. Suddenly, he turned back on himself, shooting off at an angle level with the ground below. Following a river through a shadowy gorge, flying just above the treeline of the forest, Tan-y-Mynedd the Fire-Dragon soared skilfully ever onwards. The ground below rose and then dipped away again into a deep valley, shrouded by mountains on all sides. The darkness of night began to fade, rose-pink and magenta flecks and flashes streaked across the ever-lightening sky. Dawn lingered in wait upon the horizon.

The great Dragon pulled back both wings, thrust out a proud armoured chest, extended four thick, muscular, scaled legs, flexed talons and swished his tail high. Expelling hot air from both nostrils in clouds of steam, he landed rather less than gracefully on a scree covered mountainside. Scree, rocks, dust and debris flew in all directions. As the dust cloud settled, a morning sun was just beginning to rise, shrouded in streaks of multi-coloured cloud – a landscape in the sky, painted by wizards. Scrambling from this ‘steed of the air’, legs shaking like jelly clothing brawn, my feet touching solid ground again, I heaved a sigh of relief. After hanging on to dear life on a dragon’s back for heaven knows how long and also not knowing how far we had come, I had a need to take a deep, deep breath. Standing perched on a rock while looking down the valley at the lake below, Tan-y-Mynedd the Fire-Dragon pointed with one great wing towards a cave set back in the rock-face and quietly spoke in the ancient language.

“The Great Council of Blue Stone.”