The year is 1850 and the valleys of South Wales caught in the midst of The Industrial Revolution are buzzing and humming with life. Not content with their respective jobs as an Under-Gamekeeper and Iron Worker, Morgan Lewis and Dai Davies had other things in mind. A verbal contract to poach his Lordship’s game broken, a mass of intrigue, greed and violence stunned and shocked a whole community. Two families torn apart, but why?

ON THE TRAIL OF THE BALLAD OF PENYGRAIG

FROM THE ALBUM ‘BALLAD OF PENYGRAIG’

A Poacher leaned against the foot of a large sycamore tree staring at the empty snare on the moss in front of him. Kneeling on the cold wet ground icy from the winter night nearly done, our poacher picked up an empty snare examining it closely. Strands of hair and fur stuck to the snare stained with blood now frozen from the early morning. No doubt in this mind, young sharp eyes quickly scanned the forest to the left, right and in front. Turning quickly there was  nobody to be seen, only bare trees and shadows. Listening in silence nothing unusual or untoward disturbed the end of night and the beginning of a new day, excepting the distant bark of a dog fox echoing throughout the forest. Perhaps this vocal carnivore was the thief? Frozen evidence held firmly by his icy fingers informed our poacher of a rabbit once caught now gone! Foxes often raided snares snatching the helpless victim but the disturbance on the ground and the fact that the snare had been undone to release its prisoner, informed him that the fox was innocent of this crime. Gently our poachers icy fingers, stroked the ground where the snare had lain throughout the night. Blood specks in frozen suspension splattered across the snares residual image indented on the earth and moss. Slightly off to his right two large imprints of boots were clearly frozen into the moss. Similar prints faded on the frozen earth off to the left. Our poacher mused and muttered under icy breath.

“If the thief was that fox it was on two legs and wearing huge boots?”

Bare trees offered no shelter from the freezing January winds. Pulling a woolly muffler around his neck and shivering he got to his feet. Putting the empty snare in the bag that was hanging from his shoulder sharp eyes took a last look at the scene in front of him. This was the seventh snare found empty this morning. There had been four yesterday that suffered the same fate and a number over the last couple of weeks. Our poacher was being poached! Spitting on to the ground he cursed under frozen breath and turned towards home with an empty bag. There would be no rabbit stew today. Heading for Penygraig Farm he trudged through the forest down the mountainside. A thin layer of snow covered everything as far as the eye could see. The sun was starting to rise but the cold perished our poacher to the very core of his bones adding to the increasing sense of anger and frustration that invaded every cell. He knew that somebody must have been following him and springing the snares but who was it? He was angry, very angry. As the morning mists started to lift from the trees our poacher, Dai Davies walked through the farm gate. Jenkins and Big John were eating breakfast when the door opened with an urgent creak as the rusty hinges heralded gusts of freezing cold morning air. Their little brother Dai Davies stood in the doorway.

”Shut the bloody door Dai!” Jenkins spluttered crumbs across the breakfast table. Dai slammed the door shut but caught his hand on the handle creating searing pain in cold fingers still numb from nocturnal poaching. Dai swore under his breath and kicked the door in return for this assault upon his person.

“Take it easy Dai Bach, too early for temper!” Big John poured steaming water into the teapot, stirring the tea leaves before putting the lid back on the teapot and the kettle on the fire.

“It’s happened again!” said Dai. “Seven empty this morning, seven!” Dai roughly pulled off his overcoat and threw it on to a chair in the corner.

“Somebody’s bloody following you Bach. They know where your snares are before you get the chance to see if they are full. It’s the ghost of a poacher!” Jenkins laughed loudly spitting crumbs and choking on his own joke. Big John looked at Jenkins with kind eyes and smiling he said. “Leave him alone you bugger!” He leaned forward across the table and helped himself to more bread from the half eaten loaf that sat between these two huge men.

“Ave to be a ghost to follow our Dai Jenkins wouldn’t it and a bloody clever one at that. Blooming ghosties eh!” 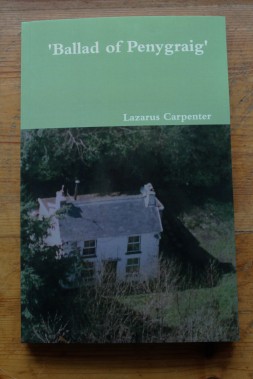